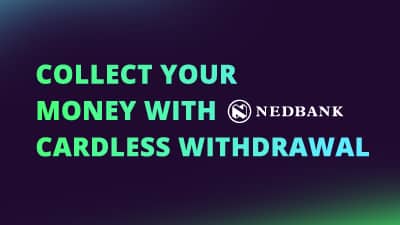 Nedbank Group is a financial services provider in South Africa that operates in wholesale and retail banking markets. They also provide services in the areas of asset management, wealth management, and insurance. Nedbank Group owns 100% of Nedbank Limited, making it a wholly-owned subsidiary. The majority of the bank’s business takes place in South Africa.
A digital option known as Nedbank’s Cardless Withdrawal gives customers the ability to send money to any recipient using their cell phone, regardless of whether or not the recipient is a customer of Nedbank.
The money can be withdrawn from any Nedbank ATM or retail location participating in the promotion by the recipients. Through Nedbank’s partnership with OTT Collect, this now includes over 42,000 sites close to users’ homes, in addition to Nedbank’s banking footprint.
To withdraw the money, recipients will receive a 10-digit voucher PIN and a four-digit one-time password (OTP) on their mobile phones. These two pieces of information will allow recipients to access the funds.

Nedbank Group is one of South Africa’s four largest banks, with Nedbank Limited as the principal banking subsidiary recognised by millions of South Africans.
Nedbank Group’s principal focus is on the South African market; however, the rest of Africa represents a significant growth area for the company.
Outside of South Africa, Nedbank has operations in five other countries that are members of the Southern African Development Community (SADC). These include Lesotho, Mozambique, Namibia, eSwatini (Swaziland), and Zimbabwe. Nedbank has a strategic agreement with Ecobank Transnational Incorporated (ETI) across Central and West Africa and has representative offices in Angola and Kenya.
The founding of the Cape of Good Hope Bank in 1831 marks the beginning of Nedbank’s long and illustrious history as a financial institution in South Africa. Nedbank Group was established in 2003 after going through a series of name and organisational changes, including The Nederlandsche Bank voor Zuid-Africa, the Netherlands Bank of South Africa (NBSA), and Nedcor Group, all of which occurred in the 1980s.
Today, the group takes great pride in its status as one of the most revolutionised banks in South Africa, and Nedbank has strategic connections with companies located worldwide.

How to use Cardless Withdrawal: a step-by-step guide

1. Access the Nedbank Money app, online banking, cell phone banking (USSD), MobiMoney, Avo, or the Nedbank Private Wealth app.
2. Select to pay or send money to a cell phone.
3. Enter the recipient’s cell phone number.
4. Enter the amount you would like to send.
5. Confirm the transaction to complete the process.

Through the cardless withdrawal option, customers of Nedbank can quickly and easily transfer funds to recipients, regardless of whether or not the recipients are Nedbank customers.
By entering a secure voucher number and a one-time password, recipients can withdraw cash from any Nedbank ATM or a selection of retail outlets. The bank has already formed partnerships with Shoprite, Checkers, Usave, and OK shops and intends to expand its presence throughout the country in the coming years through its collaboration with OTT.
These changes align with group’s continuous commitment to ensuring that customers who favour convenient and cost-effective cell phone banking can now use other advantages made available by this widespread platform.

1. What is Nedbank cardless send?

Through the cardless withdrawal option, customers of Nedbank can quickly and easily transfer funds to recipients, regardless of whether or not the recipients are Nedbank customers. By entering a secure voucher number and a one-time password, recipients can withdraw cash from any Nedbank ATM or a selection of retail outlets that sell OTT.

2. How do I register for cardless withdrawals?

Although registration is not required, you will need access to a Nedbank digital banking platform or a MobiMoney Account.

Yes. You can send cash without using a card if you have an active Nedbank transactional account (current or savings) or an existing MobiMoney Account.

4. How much can I transfer?

The maximum daily amount that can be sent is R5,000. However, there is a default maximum limit of R2,500.
You can raise the maximum limit on your card to R5,000 at any branch, through the Money app, or any online banking channel. Users of MobiMoney who have not yet finished the FICA process in its entirety are subject to a maximum transfer limit of R4,000 per transaction.

5. Where can recipients get the cash received from cardless withdrawal?